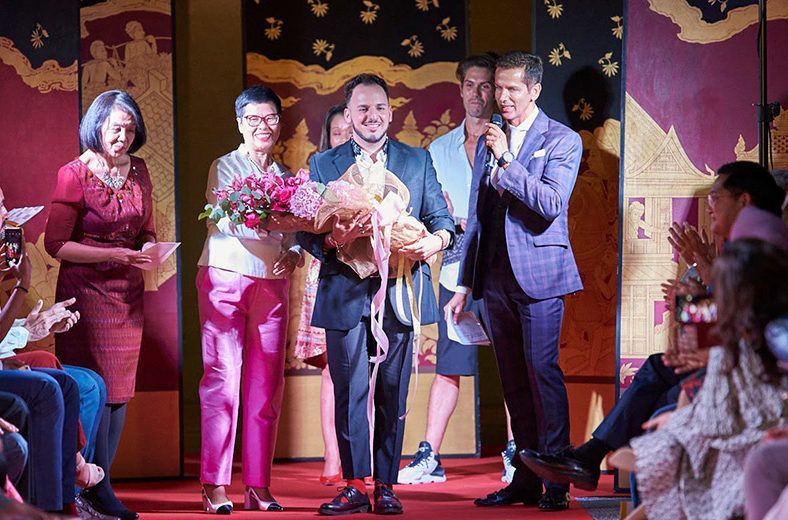 On September 12, the awards ceremony of the “Spanish-Thai Fashion Awards” took place where David de Calle and his collection “Saeta y Mantra” was the winner.
These   awards have been created by the Thai embassies in Spain and Spain in Thailand with the support of ACME (Association of Fashion Creators of Spain) and the endorsement of Support Fondation chaired by Her Majesty Queen Sirikit of Thailand. Their objective  is to establish a dialogue between Spanish fashion and Thai silk, thus strengthening cultural relations between both countries and contributing to the Sustainable Development Goals.
It should be noted that the Lal La Buyaassociation, made up of women from the city of Melilla, will make the collections of the finalist designers.
And these were the chosen ones:

The Thai embassy in Madrid was the place chosen to hold the contest, where we enjoyed their well-known hospitality and where we could see a sample of the raw material with which the collections were made, as well as a small silk workshop where they showed the artisan process followed to make this precious fabric.

As a jury, we had a cast of great professionals and personalities who raised the contest in category.

And as always trying not to extend myself too much …, (although sometimes I don’t succeed …) I will show you what these 3 magnificent designers were capable of.

As you have seen, although David de Calle was the winner, it could easily have been any of them.

And for the part that touches me, thanks to the master of lights who behaved like a champion to the new compis who are always a pleasure to meet and to Madrid who has treated me wonderfully.

This website uses cookies to improve your experience while you navigate through the website. Out of these, the cookies that are categorized as necessary are stored on your browser as they are essential for the working of basic functionalities of the website. We also use third-party cookies that help us analyze and understand how you use this website. These cookies will be stored in your browser only with your consent. You also have the option to opt-out of these cookies. But opting out of some of these cookies may affect your browsing experience.
Necessary Always Enabled
Necessary cookies are absolutely essential for the website to function properly. This category only includes cookies that ensures basic functionalities and security features of the website. These cookies do not store any personal information.
Non-necessary
Any cookies that may not be particularly necessary for the website to function and is used specifically to collect user personal data via analytics, ads, other embedded contents are termed as non-necessary cookies. It is mandatory to procure user consent prior to running these cookies on your website.
SAVE & ACCEPT